Can WeWork prove its value to investors ahead of IPO? – Property Week

News that WeWork is set go public means the question of whether the company’s eye-watering valuation of $47bn (£36bn) is credible will finally be put to the test. 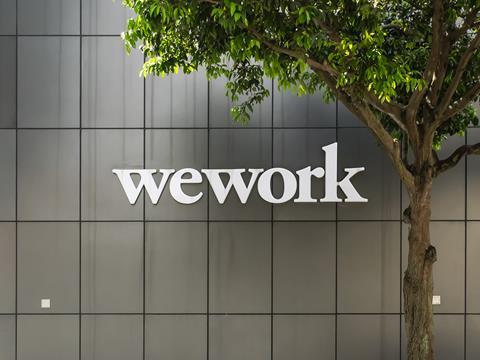 Last week, the co-working giant filed paperwork to the US Securities and Exchange Commission (SEC) for an initial public offering (IPO) later this year.

Many in the industry have long been sceptical about the valuation ascribed to WeWork by its backers, led by SoftBank, and are doubtful that the company’s IPO will be successful. A snap poll of Property Week readers this week showed more than 70% thought it would never reach SoftBank’s £36bn valuation.

The valuation is 12 times the £3bn stock market valuation for IWG, which owns the Regus brand. Yet IWG is larger and profit-making, whereas WeWork, by its own admission, is unlikely to make a profit any time soon.

Many UK landlords are not just doubtful about WeWork’s lofty valuation but about its business model and are nervous about letting too much space to the company. Earlier this year, Property Week revealed that Worthington Properties had pulled the plug on a 43,000 sq ft letting to the company at 125 Deansgate in Manchester, citing concerns about the potential impact on the investment value of the building.

The scepticism is not limited to industry insiders. After the publication of WeWork’s financial results in March, the value of its bonds, which have been highly volatile, slid to a low of 91 cents in the dollar.

WeWork, however, has its advocates who believe the IPO will be a success. Will Kinnear, co-director at flexible workspace specialist GKRE, says there is more to WeWork’s IPO than meets the eye.

“If it was purely a real estate IPO, I would argue – especially from a UK point of view – that WeWork has too many question marks around it,” he says. “But as the IPO is for the whole We brand, it will probably be a success because it’s something new and exciting, and has something that investors could get their teeth into.”

Kinnear says that US investors see the We brand, which encompasses other ventures such as co-living business WeLive and entrepreneurial school WeGrow, through “different eyes” to the more traditional UK real estate market.

There are also plenty of examples of large loss-making firms that have successfully floated in the US. Beyond Meat, a start-up producing meatless burgers, went public last week and saw its share price more than double within the first hours of trading. Uber is another example. By the time this magazine has gone to press, Uber will have started trading in what it hopes will be the largest IPO of the year.

“The American market can see the overall product but here, especially in the real estate sector, we just see it as ‘what are they paying on their rent and are they likely to have a return on their workstation prices?’,” Kinnear says.

“So far it has aggressively filled up its centres at below workstation rates in the areas in which they’ve opened and in doing so has driven those rates down across the board. This will only change when the waters calm around new flexible workspaces opening and demand outstrips supply – then rental prices will be able to grow.”

Gavin Kamara, head of transactions at Kontor, is another flexible office expert who is upbeat about WeWork’s prospects. He says he is “absolutely confident” that the IPO will be a success.

“Tech obviously plays an important part,” he says. “Real estate has been traditionally viewed in a very black-and-white manner, but WeWork is pushing the boundaries of that. It’s much more than simply a bricks-and-mortar business. To a certain degree, the reason why it has been so successful is that it has been able to capture and satisfy demand across the occupier spectrum.”

WeWork co-founder and chief executive Adam Neumann also believes the company is about more than just bricks and mortar. In an interview in 2017, he said the company’s “valuation and size today are much more based on our energy and spirituality than on a multiple of revenue”.

That may have won over SoftBank, but it remains to be seen whether it will be enough to convince investors to back an IPO.

We use cookies to ensure that we give you the best experience on our website. If you continue to use this site we will assume that you are happy with it.OK